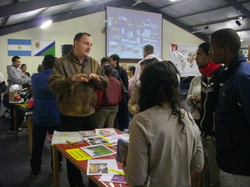 When I was about 30 I was asked to lead the global day of prayer in Potchefstroom. I lead it for 2 years and it was very successful as we mobilized the mayor and about 2000 people with about 30 pastors in the year.

After that I prayed and asked if I can have something to do with discipleship. After that I met Stefaan who invited me to the South-African staff conference in 2008.

In 2009 I felt God saying: “In the middle of the year you are going to walk out of your business”. As the middle of the year approached I asked God where the fulfillment of His word was. Shortly after a missionary called me and told me there is a dts that is going to be held in Pretoria, he thought it was from God.  I went to Pretoria for the dts in difficult financial circumstance. God provided miraculously.

Then in the half of 2011 I felt God saying that my wife must quit her job and that we must come to the Worcester base to study for a year (2012).

Through the year it became clearer that God wanted us to have a base with a clear University focus. Stefaan asked us to go to the USA to meet with the University mobilization ministry in the USA.

2013 was the year of establishing the base in Potch and starting with training in June (Theophostic counseling seminar) and November (University focus DTS).
2014 We had our first DTS from Nov 2013 - April 2014. We moved to a property closer to the campus. Running DTS and also a University student house for this year. Housing 20 students, most from poor backgrounds. we also trained Prayer counseling courses .
2015  Our second DTS "Foundations for Miracles" from Nov 2014 - April 2015. We  did a Prayer counseling course this year in Potch but also in Ventersdorp, our neighboring town.
2016  Our third DTS "Calling to God's Presence" from Nov 2015 - April 2016. Moving the YWAM house to our own house.
Background

When I came to know the Lord I was zealous for the work of the Lord. At the age of 18 I was very depressed. In this depression I met the Lord, and shortly thereafter my wife. We met up with a mission organization and started to get involved with all kinds of ministries.
We started with one of many ministries. This included being trained by an American and South-Korean mission organization for 3 years. They didn’t believe in the gifts of the Holy Spirit though and our paths separated. Then we had ministries among drug addicts, gay people, street children, students and gangsters. God started to bless our ministry. The big family of five children and our finances were a problem. I then started a business to help support our ministry like Paul. The more I worked the more money we needed, the more I had to work. I was also falling into a bad debt problem. Where was God?

Later on I decided I must do something and had to get back into ministry. I then started a mission church amongst the Tswana people in the poorest part of the black area. I wanted to empower the people and make the people without jobs cell-group leaders. After a time at this church, with a lot of amazing experiences, God called me to organize a day of prayer for the whole city of Potchefstroom . When I told this to the pastor who tried to organize the day of prayer the previous two years he said:”It is impossible in this city, you will never succeed!” As he talked to me I saw a vision of a printer printing out about 2 pages of instructions. I kept quiet and said: “I will just give it a try.” In those two years God called me for Global day of prayer we had the biggest prayer days in the city’s history. There was tremendous pressure though and I even got a death threat for my efforts and no salary!
After that I was involved with a big cel group church. The biggest church in the Southern-African region, with 25000 members in their main church. They grew out of a cell-group and multiplied through house churches. One thing bothered me though. They didn’t multiply people that were really free! They were kind of free but not totally. Individuals where not launched to live their dream.

While I was involved with them I met Stefaan and decided to investigate Ywam. After doing my DTS in 2009 I saw God’s miraculous provision and His voice was leading me continually more and more into mission.
Powered by